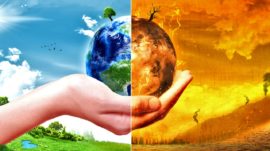 It has been known and documented for decades that for a person to enjoy full health he/she has to be in a state of physical, mental and social well-being (WHO 1948). As a result, any factor that affects one of these aspects of our health will naturally cause an overall imbalance in our well-being and quality of life.

As human beings we live in continuous contact with our environment and thus anything that happens to it will directly affect us. Apart from the scourge of the inevitable natural disasters, such as earthquakes and floods, most phenomena in our environment occur as a result of the influence of mankind. Climate change is one such phenomenon.

Climate change is defined as a long-term change in the earth’s climate especially related to an increase in atmospheric pressure – global warming – which has been particularly apparent from the mid to late 20th century onwards due to the uncontrolled use of fossil fuels. Such consistent rise in our earth’s temperature has had dramatic effects on our planet in the form of disasters such as floods and droughts and also more gradual changes such as the progressive rise in sea levels, imbalance in existing ecosystems, food insecurity and increase in pollutants, allergans and disease.

According to Lewin’s social Field Theory (1934), each individual is in a mutual relationship with his environment. As a result, the harm that mankind inflicts on the latter and the resultant effects, in turn affect the quality of life of human beings both on a global and an individual level and across the three determinants of well-being. 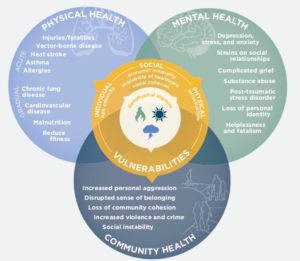 Unfortunately, however, it is the physical outcomes of climate change that are given more coverage and importance, since they are more evident and tangible. The psychological and social effects of such environmental events can be felt at an individual and an interpersonal level and are thus more subtle resulting in them being given secondary importance or overlooked altogether. These can range from severe general anxiety to phobic, somatic, impairment, depression and substance abuse. All these symptoms are usually put under the umbrella of a syndrome known as posttraumatic stress disorder (PTSD) which can also be characterised by psychosis and suicide ideation.

Nowadays, the interplay and mutual effect between the three factions that characterise healthy wellbeing as affected by climate change is thankfully becoming more evident. Physical health outcomes mostly in the form of environmental disease (asthma, eczema, loss of body parts), death and loss of property and occupation are documented as being the main cause of loss of emotional and social/community stability while the reverse is also true with emotional stress being found to be the cause of physical ailment like decreased immunity and vulnerability to disease, sleep disorders and cardiovascular disease. The effect of climate change on the social or community well-being especially in vulnerable societies is also being put to the forefront.

This awareness can be of little value if as individuals we do not take our responsibility to our environment seriously in our daily existence. Unfortunately, many times we are so taken up with our lives in our immediate world that we fail to acknowledge the suffer and distress that might be taking place miles away from us thinking that it cannot happen to us. Although such psychological distance can protect us from further or compounded stress it can also alienate us from certain responsibilities which we do not do well to ignore.

The reality is that we are connected to our earth beyond the vicinity of our homes and denying it is futile.