Echoes from an Unknown World 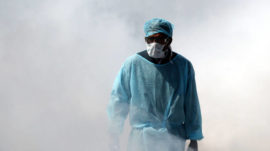 I have been meaning to write this blog for weeks.  A multitude of thoughts and reflections were racing through my head, still I was finding it hard to put them down in coherent sentences even if writing was always a preferred medium for me to express myself.   But that was before Covid-19 took away the world I knew, the world that gave me my identity and the security of an everyday life.

Or so I thought.

Being a medic and a psychotherapist put me on the frontline with a bang in the initial stages of the pandemic. Something new was cropping up every other minute, whisking the ground from under my feet leaving me struggling to adjust again…and again.  It was challenging everything I had stood for and believed in as a professional, my medical knowledge, my work ethos.  I felt myself caught in a never-ending whirlwind of fear, loss,  sense of duty, lack of support and above all change and this made me feel as if I was plucked from my world and thrown in another which albeit familiar, felt vague, sinister and lifeless.  I had no idea who I was in this new world and even less how I was supposed to act; even the simplest day to day actions started to be perceived as dangerous and a threat to my very own existence.

Since time immemorial, all members of the animal kingdom, including human beings responded either by fight or flight to situations that threatened their survival.  But that was at a time where the threat was visible and to a certain extent known.  In this unprecedented reality, where the threat is imperceivable and unpredictable, the human race, found the support systems that contained its everyday existence, including this primordial defence mechanism, shaken to the core, leaving it struggling desperately between finding the best way to counteract it or disassociate from it altogether.

In the span of a few weeks, the race which had reigned supreme for thousands of years pampered by affluence, power and progress was literally ground to a halt by an ultra-micro organism - the smallest of all living matter.  The being that prided himself to be narcissistically invincible and independent to the point of individualism had to contend with the crass and humbling reality of facing his vulnerability and worse still his mortality.  Uncannily Sting had nudged our awareness in his beautiful lyrics:

How fragile we are

How fragile we are”

But we did not listen.

On and on we went in our frenzied obsessive drive down the fast-lane is search of a happiness we thought we could find in money, success and liquid relationships.  We firmly believed it was the best thing for us to cope alone without needing each other and the principles and values that defined us even if mental health illness, family breakdowns, lost children, chronic illness, pollution and war plagued our planet from pole to pole.

And then one pathogen and one illness took over the world and time stood still.

Like passengers in a speeding car our beings reeled at the sudden halt.  We came to realise that our gas pedals were clamped and we had to contend with being prisoners in our own homes, totally segregated from each other and the entities that constitute our daily lives.

We had to contend with the hidden power, destructiveness and lack of democracy of a microorganism that put even the most powerful of world leaders and economies on their proud knees and teaching each and every one of us basic social manners and hygiene.

We had to contend with the fact that we do not own the earth and more so we cannot take it over without it lashing back.

Above all we had to content with our vulnerability, our fragility our need of each other and our commitments and responsibilities to our society.

Caught in this web of conflicting experiences of:

acting out and withdrawing

We are masters of that choice.  The Earth will just respond accordingly......