Living in Hiding – The Silent Pit of Shame

Honesty is a value we treasure. It gives us the security of knowing that we are receiving what we are perceiving and thus supports us to relate to the other fully, without reservations. Yet we all have to concede that there are many facets of us we do not show to the world around us, at times not even to ourselves, for fear of being rejected and thus losing an aspect or all of who we are and the belonging we all yearn for. Such are the roots of shame.

Shame has been described as that painful insidious experience that makes you ‘just want to disappear and never be seen again’ or wish ‘the ground would just open up and swallow you’, an experience of self-loathing where you, not only believe but know that you are alone, as no one wants to be with you, to breathe your same air, to touch you or see you. Shame is thus not a simple feeling or emotion but a self-experience of who you are to the world and thus your identity.

Shame is not a disease or a condition you are born with or inherit from your parents. On the other hand, it is the experience of how you are seen and acknowledged, from the day you are born, initially by your core family members and subsequently by your peers and educators. If your experience was one of neglect, criticism or of being continuously put aside in favour of a sibling than naturally you come to believe that there is something wrong with you and that whatever you do you can never measure up or be ‘enough’ and thus worth loving. You come to believe that your place, like Cinderella, is in hiding and light can only bring up how flawed you are.

I once asked a 10 year old girl, I was seeing in therapy to use toy models to show me her experience in her family. Janice (not her actual name) was the older of two sisters, lived with her parents and was brought to therapy due to severe anxiety and difficulty in relating to her peers at school. She chose a doll and a tiger and placed them as shown below: 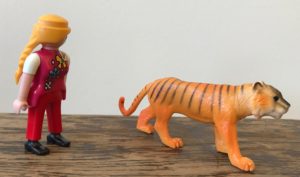 On questioning it transpired that she chose the doll model as it was very well groomed with neat hair, well-kept clothes and manners what she described as a ‘good girl’ and ‘the way a girl should be’.  The tiger, on the other hand,  was a representation of herself when she misbehaved in class and when she was thus a ‘bad girl’. Both the girl and the tiger were looking away from each other and from her as if trying to hide their faces.

During our session it became clear that the ‘girl’ was desperately trying to be a ‘good girl’ all the time but the ‘tiger’ kept coming in with its naughtiness and ‘bad behaviour’ and sabotaging her without warning. This was, in fact the girl’s biggest concern, that she could not keep control of her ‘naughtiness’ and was thus risking all the time to lose the approval of those around her, especially the adults. This led to a severe form of anxiety and wariness that she was going to do something wrong all the time, to the extent that she felt edgy even when someone else did something wrong fearing she could get unjustly blamed.

On closer examination of her ‘naughtiness’ I realised that what she was describing as bad behaviour was in fact very normal for a 10 year old like talking in class or not paying attention. Very apparently this girl was not being allowed to express her spontaneity, on the other hand she was looked down upon and criticised at the slightest misdemeanour mostly by her mother who apparently was much more tolerant of her younger sister. As a result, she became very ashamed of it and thus of who she really was, trying to deny it in the process while struggling with the ‘good girl’ image that would have got her mother’s love, approval and acceptance.

The above is just but one experience in childhood that, if lived over a period of time, can result in deep shame and thus in denial of one’s way of being or identity. A child would do anything to get her parent’s love and approval even denying itself – Eric Berne also insisted that a child would rather have a negative experience with a carer than no experience at all. Likewise if a child has to lose his/herself to be able to relate with his/her parents than that becomes the relational blueprint that will carry him/her throughout life.

Therapy, with its focus on establishing relationships through genuine contact and acknowledgment of who the client actually is can be of utmost support in getting out of this dark pit and enjoying the light without the fear of being seen in our own ‘nakedness’. For Janice, the acceptance of her ‘naughtiness’ during therapy as a healthy and essential part of her spontaneous self allowed her to integrate it as part of her identity and to look upon the world around her with a smile. 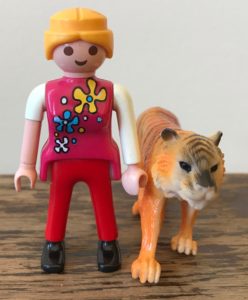