I Want to Love Them Both 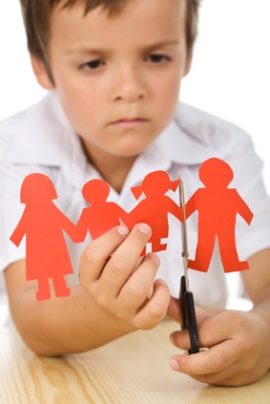 When 7 year old Jan* was brought to therapy by his mother he made it clear he was coming under protest and that he was not going to utter a word. However as soon as he entered the clinic his face broke into a shy smile and he also allowed me to hold his face.

Jan is the youngest of two siblings, his mother is Maltese while his father hails from a Muslim country. The relationship between the parents was always unstable especially since the father consistently shunned any marital and familial duties most of the time refusing to work, help around the house or even give attention and care to his children. A number of times he left the country unexpectedly for months on end hardly making contact with his family only to return just as unexpectedly disrupting the quieter routine they would have set up in his absence.

It was the lastest such disruption that caused so much disturbance in Jan, that the mother thought it best to get her son to therapy even if against his will.

My first impression of Jan was that he was struggling with conflicting feelings of resentment (protest) and yearning (smile/touch); while he strongly resented having things decided for him like the breakdown of his family and being taken for therepy he also had a yearning to be seen, held and acknowledged in his pain .

In fact, when after some time in the session his mother asked if he like to spend some time with me alone he immediately agreed. Using animal figurines we gently explored the family dynamic especially the anger between his parents, his elder sister’s anger towards their father and his place or lack thereof in this challenging reality. Ironically in all this turmoil all this little boy was asking for was the space to love both his parents equally and be excluded completely from the angry triangle.

During development, a preverbal child introjects his/her family dynamic or script (Byng-Hall, 1985) through imprinting (Schwartz, 2000) and perceives not only the mother or the father individually but what is going on at the contact boundary between them (Spagnuolo Lobb, 2009). Preverbal children were found to need the security of an emotionally stable marital bond between the parents more than they need the relationship between the parents as individuals (Satir, 1972). As a result they are ready to give up even their most basic emotional needs not to lose this vital security in their lives. I believe that the yearning to to love both his parents was Jan’s desperate way of keeping that bond in some way or the other.

Marital breakdown is a uniquely painful experience for the couple especially if one of the parties is abusive or neglectful to the other creating turmoil and irrepressible anger. Unfortunately many times the children are dragged in the midst of the conflict leaving little space for their pain to be acknowledged, let alone understood or held. Even more unfortunate is the unfair judgement and stigma these families usually face instead of much needed support and guidance.

In my opinion this judgment from society stems from the erroneous assumption that conflict resides in families harbouring domestic violence or couple difficulties of various degrees. This, however, is far from the truth. Conflict can also be hidden in families who to the outside world seem to be functioning well, hidden in the subtle emotional abuse of one partner to the other.

Children in such families suffer too, if not more, as most of the time they know something is wrong but cannot really put their finger on it let alone deal with it. Likewise this aura of instability erodes their internal security, their perception of what is real and most of all their existential need to love both their parents equally and freely.

This is why any child brought to therapy for whatever reason should never be seen as the problem but as a symptom of a family system that might be harbouring more than meets the eye. As the eyes are said to be mirrors of the soul, children are the mirrors of our family systems and subsequently the societies we build for them. So before attempting to remove the proverbial speck from our children’s eyes we could do better to attend to the plank in our own.

Then our children can truly be free to love and live.

On Being an AdolescentThe Many Faces of Truth