Losing All Your Family in One Day 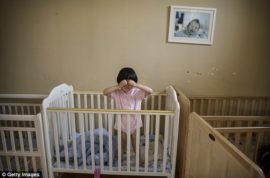 “How would you feel if you lost all your family in one day?”

I confess that I was so deeply struck and moved by this question, posed to me during therapy by a 20 year old client, that I was at a loss for words as my mind was flooded with images of very small children crying desperately after being abandoned to their fate and my own memories of the anguish and terror I had experienced when I got lost in a crowd and was separated from my family for what seemed like a million eternities.

I had been following Eva (not her real name) for a number of months due to relationship difficulties especially with her mother and episodes of deep sadness and desolation. Eva had been adopted at 8 months of age from an Eastern European country; she got to know about her adoption at the age of 12.She shares the deep struggles with her feelings of loss, lonliness, desolation and conflict – wanting to know about her family of origin but yet afraid that she might find out that they have moved on happily without her and left her behind. She is an only child for her adoptive parents. Although she has a large extended family which are very present in her life, she feels that no one truly understands the deep pain she endures day by day having to live with this ‘hole’ in her soul that once held her mother.

The bonding between a mother and her child “does not begin at birth, but is a continuum of physiological, psychological and spiritual events which begin in utero and continue throughout the postnatal period” Verrier (1994). Stern (1985) describes a psychic shift in the expectant mother where her focus changes from the husband-wife dyad to a triad encompassing her mother as a role model, herself and her child – or what he called the motherhood constellation – where the mother prepares herself to receive, nourish and support her offspring.  As a result, “when this natural evolution is interruped by postnatal separation from the biological mother, the resultant experience of abondonment and loss is indelibly printed upon the unconscious minds of these children….” (Verrier, 1994), leaving what she describes as the primal wound.

“Too often…..we deal with the newborn as if he is…..’brand new’. We neglect the fact that the neonate is really the culmination of an amazing experience that has lasted forty weeks”
T.B. Brazelton (1982)

Every wound incurred is followed by a healing process. Depending on their depth and severity, some wounds heal completely leaving no sign of any trauma. Others, on the other hand, leave a indelible scar which withstand the best medicaments and the passing of the time. Yet others never heal and remain a source of deep pain and vulnerability. Roos (2002) describes such chronic grief as “a set of pervasive, profound, continuing and recurring grief responses resulting from a significant loss or absence of crucial aspects of oneself (self-loss) or another living person (other-loss) to whom there is a deep attachment…..The essence of chronic sorrow is a painful discrepancy between what is perceived as reality and what continues to be dreamed of. The loss is ongoing since the source of the loss continues to be present. The loss is a living loss…”

Having to carry an open wound in one’s soul means that every experience that is minimally connected to such a loss results in deep pain and loss of general functioning. It is an unfinished business that keeps pushing for resolution but finding a perennial hard brick wall of unanswered questions and confusing feelings and thoughts. Roos (2001) explains how “these incompleted directions do seek completion and, when they get powerful enough, the individual is beset with preoccupation, compulsive behaviour, wariness, oppressive energy and much self-defeating activity” Many adoptees in fact share deep feelings of aloneness and abandonment and difficulty to connect to others even to their adoptive families. As a result, while longing for holding and love they express behaviours such as anger, defiance and impulsivity, at times to the extreme of anti-social behaviour such as criminality and drug abuse to ironically re-create the abandonment they so crave to understand. Whilst the people around them are celebrating their birthdays and showering them with love and gifts many feel disconnected with any feelings of joy and celebration and instead are pervaded by anguish and loss.

Unfortunately our society today is doing very little to support these children and their adoptive families in understanding their unique experience of loss. Many adoptive parents too feel alone in their struggle to raise children who are not being biologically theirs and many times have been abandoned and left in dire neglect, especially since they still love and cherish them deeply like their own. Many times, these couples are themselves trying to cope with the deep pain and loss of infertility or multiple miscarriages. Adoption needs to stop being seen as a hand-and-glove solution for abandoned children and childless couples as this can only foster the unneccessary judgement where the children are seen as ungrateful and the parents inadequate in an existential experience shrouded with loss, pain and deep unkown.

As a society, and more so as professionals in the field, we need to work more at truly being with these individuals in their unique experience where they are desperately trying to love and find each other across a barbed wire fence of deep loss, abandonment, pain and shame. There needs to be more research and publication and most of all more of us to take the responsibility and moral decision to get in touch with our own pain and loss as only then we can truly be with them and give them the support they so direly need and rightly deserve.

There is a moment of silence. Doris sits, her hands now folded and resting on her knees. When she speaks she seems to do so from a far away place. She does not look at me.

We have been working on her ‘family tree’, looking at her roots and the family she created with Jo more than forty years ago.

Doris has come for therapy at her daughter’s prompting because of problems ‘in the family ‘. There is a first session, then a second. We look at what it is that has brought her to the clinic. She talks about her children and grandchildren and then briefly about her 60th birthday and how she dreads it. We talk about what it means to her to be ‘getting on’ and she laughs, yet I am aware of our talking around something – some thing or some event that is present in the room but remains unspoken of.
‘I got married as soon as I could’. She tells me. ‘It was very hard, we had nothing – Jo and I’. ‘Of course, my father was against it but he wouldn’t speak to me and refused to look at me  for so long that it hardly seemed to matter’.

‘How old were you when you got married?’, I ask.

She tells me how they made her wait until she was 15 and Jo was almost 17 and of how they went to live with his mother who loved her like the daughter she never had and how it was that that had helped her to grow up enough to be a good wife. She has a far away look in her eyes and stops frequently, and then, quite out of the blue, tells me of how things changed at her own home long before Jo was in the picture.
‘I loved the village feasts. I helped my mother clean the church and sometimes we would go on family outings by the sea that the priest had organised. I was happy. Really happy.’

I note her use of ‘was’ and wait. ‘Was?’ I ask. She tells me of a time before things changed, of a boy she had been seeing and who she planned to marry. ‘I was 13!’ She laughs almost despairingly yet there is also a softness now as she recalls the girl she once was. ‘What happened to that girl?’ I ask softly and for a moment some thought, memory or emotion crosses her face. Something I can’t quite read that momentarily escapes her control before a shutter drops and that moment is gone.

She is caught briefly in her own internal world, a place I think she goes when a difficult memory is triggered. I draw her back into the space between us as we talk about my new therapy room, about the display cabinet and after a while she is more present and we close the session.

We have got to our fifth session now, and once again the pause has come with her having lost her train of thought. I prompt her and she blinks and asks, ‘what was I saying?’. She never tells me that first ‘boyfriend’s’ name but she picks up the pen she has been using and marks the geno-gram  we are working on. It already shows the mmembers of her large complex family as well as some of their relationships. There is a lot of loss that look at and she starts to process but it is this last single mark that seems to be the loss Doris carries around with her.

‘I had a child.’ She says simply. There is no emotion that shows but it is there, I know. She sits in her silence and together we wait.

Doris is a shadow mother. A mother who has lost her child to the world but it is a child she still carries despite the adoption she had no choice in. 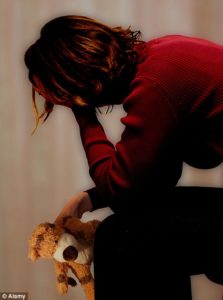 This often invisible, freaquently demonised member of the adoption triad – the birth parent – has little or no lasting support.  Doris has never had the option of therapy and there was absolutely no one that she could ever talk to because there is a child she can not speak of, whose fate she does not know and with it a disappointment and pain, an awful shame she holds for the ‘trouble’ she has brought on her family. This is the source of pain, guilt and shame that interupts her presence in the world and leaves a void between herself and her family even though she is not aware of it. But there is also a joy, a small sense of defiance that she only registers many, many sessions on – she had a child, a child with a first love, a child that she still hopes and prays for and that she does not, can not regret. It is a tiny act of defiance, the smallest suggestion of independent thought in a life that has tried to ‘do my best for the family ‘.  It is a secret that only her mother and father know and a burden she held out of love and loyalty but it is a subject she has been forbidden to ever mention and something she doubts the boy she once loved was ever made aware of because the relationship was ended abruptly and she was sent away.

Doris tells me of how her life changed the day she told her parents. ‘From that moment, I was outside.’ She had ‘fallen from grace’ and somehow shown herself to be ‘deeply floored’ and ‘not ever to be trusted’.

Doris is deeply fearful of her husband and children finding out. She is afraid that history will repeat itself and that the one thing she loves more than anything – the people she has built her world for – will disappear.

Ms. Aquilina Fletcher is a Psychotherapist & Humanistic Integrative Counsellor at The PRACTICE

“Eaten Alive” – The Silent Scourge of Mental Illhealth at the WorkplaceAre We Fully Aware of the Decisions We Take?