Before you accuse me take a look at yourself – Eric Clapton

Addiction to social media is one of the scourges of the 21st century. Many of us tend to run away with the idea that it is an affliction of our present day young generation, what we dub as generation Z or centennials, especially since they are the ones who are brought for psychological help by distressed parents usually either on realising that they have no social life or after being flagged by their schools for poor performance or untoward social behaviour.

What is sadly missed out in these situations is the fact that our children and young people live by our example in the society that we, the previous generation, have created for them. As a result, many a time we overlook the fact that we might be responsible, even if partly, to such a state of affairs.

In the past three or four decades our society has moved from the individualistic, narcissistic environment (Lasch, 1979) which liberated us from suffocating obligations and introduced us to a new sense of freedom and autonomy to a liquid one (Bauman, 2000) characterised by “fragile, uncertain and broken bonds.” (Salonia,2013:631). This relentless shift, especially over the last decade or so, has deeply transformed relational models as we know them especially in individual and family contexts.

Society today can be described as ‘borderline’, brimming with possibilities and opportunities (I can do whatever I want/wish) but then hindered by many objective difficulties in the form of economic, professional and occupational crises. Thus while it seems that ‘we have it all’ it is outside our reach relinquishing us to an overwhelming existence of contradiction and ambivalence (Conte, 2013:72).

In fact nowadays our children are living in a ‘road-runner’ world, where the parents are forever taken up with financial, academic and social constraints that is leaving progressively less time and presence for them. As a result, from a very young age, these ‘emotional orphans’ often have to contend with fleeting attachment experiences with their parents/caregivers which do not allow much space for their needs to be met or their identity to form in a coherent way. This creates a scenario where the child, and subsequently the young person, has to learn to fend for him/herself especially emotionally at an age where they most need emotional support thus giving rise to a continuous conflict between autonomy and dependence and a perennial struggle to form significant, long lasting relationships. Taken to extremes the autonomy results in the schizoid experience while dependence takes the form of addictive behaviours and patterns.

Brownwell & Schulthess (2013) define dependence and addiction as “an irresistible and compulsive demand to a certain emotional, experiential and cognitive state ….” (p366), a field phenomenon which “….becomes a fixed pattern of contacting within an increasingly shrunken world.” (p367). Here the experience is goal-oriented and dysfunctional, where the sole aim is to get the coveted object on a continuous basis avoiding withdrawal as much as possible thus forming a closed loop of contact as opposed to the open ended flow from one experience to another that takes place with healthier contact. 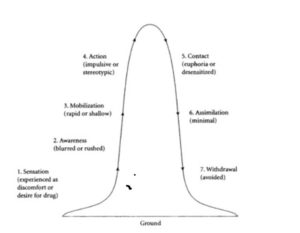 Ironically, and more so, sadly, the closed loop cycle of addiction parallels the concentrated spurts of contact that our children many a times experience with us as their carers especially when our minds are taken up with other interests which many a times even for us is the social media. So before we accuse and judge our children about their fixations and addictions to social media it would be wiser if first we look at our own. Then perhaps we can start giving our children the healthier, fuller contact and presence they need for their emotional and social survival in a world that is thriving on alienation and illusion. 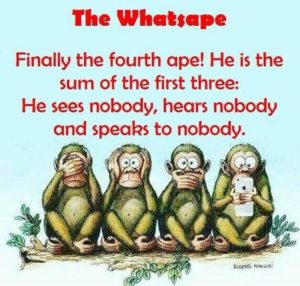 Conte, V. (2013). The Relational Narcissistic Model in the Post-Modern World and Therapeutic Work in Gestalt Therapy. Journal of Psychotherapy 2013/04

Orphans within the FamilyHit the Road Jack, NOT the Other Commuter – Dealing with Road Rage