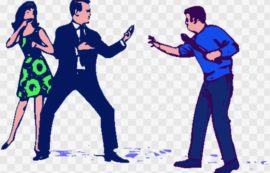 In geometry, the triangle is a plane figure with three straight sides and three angles. Outside our mathematics textbook the triangle symbolises ancient wisdom, mysticness, the Holy Trinity, the number 3 and the sacred feminine and masculine energies. In psychology , the triangle is found as a concept in situations where three people, or aspects of them thereof, are involved in a relational struggle or entanglement.

Such a concept in psychology was first introduced in 1968 by Stephen Karpman MD, a student of Eric Berne, father of Transactional Analysis. Karpman described three individual aspects that emerge in such conflicts namely the Persecutor or Abuser, the Victim and the Rescuer and showed how these triangulate in a dynamic which he named the drama triangle. 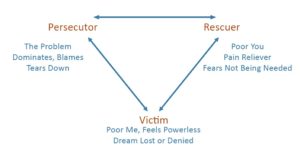 In drama, be it in the theatre, a movie or a book, the most classic conflict is between these three entities usually with the victim being rescued by the hero. Unlike in drama however, the victim in Karpman’s triangle is not seen with pity nor the hero or rescuer with awe or adulation. On the other hand, they are seen as internal aspects of an individual which then reflect the way he/she interacts with others where there is a dynamic of abuse.

Abuse of any sort is an unnatural relational process where healthy contact and thus growth and development is not allowed and thus an individual is faced with the primitive choice to defend him/herself either through ‘fight or flight’. Those who choose to ‘fight’ endorse power as a defense mechanism while those who choose ‘flight’ give up that power in favour of helplessness thus making sure that no blame is placed at their doorstep. The hero or rescuer denies either polar position and opts to protect the victim from the persecutor not out of concern for the former but in a frantic attempt ‘to look good’.

The basic affect that drives this dynamic is the shame, pain and despair that an abused individual tries to avoid. No individual is stuck in one aspect but moves from one aspect to another depending on the particular abusive situation. For example a wife and mother could be a victim of her husband’s abuse, in turn being abusive to her own children, usually to avoid further abuse from her husband, but being ‘nice’ to her neighbour or colleague in times of need to show what a good person she is. 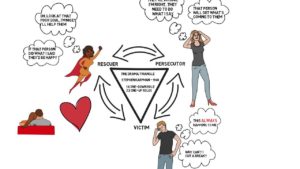 The first step in this long and painful journey is the decision to say STOP to the abuse and to take responsibility and care of oneself likewise reclaiming the authority once relinquished to the abuser. It is this first experience in owning one’s power that subsequently forms the bridge towards freedom of being. Therapy, support groups, friends and family can be of major support in healing the shame experiences that were born out of the first abusive experiences and likewise open the path to self-knowledge, self-care and ultimately self-love that is from the drama to the winner triangle. 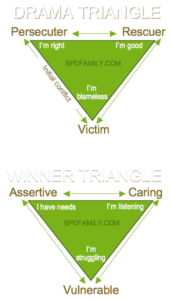